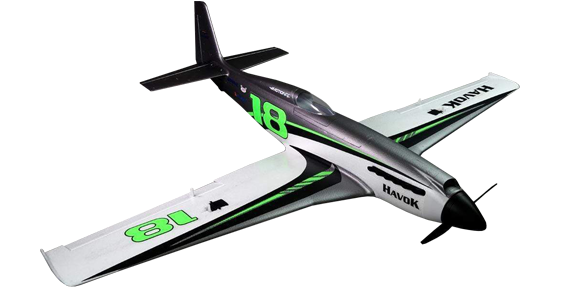 The Skynetic 1M Havok Racer is a thrilling addition to the popular parkracer category. Typified by sleek lines and lighter wing loading afforded by hand launching, parkracers often reference the Unlimited Class Reno Racers of highly modified P-51 Mustangs, Sea Furys, and other classic warbird airframes. The Skynetic 1M Havok Racer is a 100mph capable aircraft on a 4S battery for 3-7 minutes of balanced flight. Created as a well balanced aircraft for both high speed and slow speed, the Havok Racer is easy to hand launch and simple to land. Delivered in a bold graphite and green paint scheme, the Skynetic Havok Racer is an ideal club class race plane. It is the perfect platform for customization and is best enjoyed flown in groups against your friends

Rather than a lightweight straight line race plane, the Havok is adequately reinforced in necessary areas to sustain the loads of aggressive "bank and crank" flying through a racing circuit.  Carbon and fiberglass reinforcements in its one piece wing and flying surfaces provide strength, with digital metal gear servos giving positive authority while racing your friends. The Havok Racer's large rudder also rewards pilots with a wide flight envelope and precision flying. From long speed runs to short field acrobatics, the Havok Racer has the weight to penetrate stably through wind but can still be flown to a near standstill with only a mild stall.

Special consideration was taken to ensure the Havok Racer is approachable for pilots new to hand launch and belly landed race planes. Hand launching can be done overhand or underhand with three quarter throttle and a firm toss. The model doesn't exhibit the scary "torque roll" usually associated with similar racers, but instead flies out straight and level from your grip. In the landing pattern, the Havok Racer's excellent slow speed threshold eliminates the characteristic snapping stall that often threatens other race planes.

The model's upward facing aileron servo horns are protected from damage during landing, and the forward cowling and belly intake are also capped in ABS plastic to protect against scrapes during landing. The matte black anodized aluminum spinner is factory balanced for extended service life.

The Skynetic 1M Havok Racer also provides ample space for a gyro stabilized receiver, such as the Admiral RX600SP 6-Channel DSMX Compatible Receiver with Stability Plus Gyro. Pilots can opt for a lighter 4S 2200mAh battery in low wind conditions or power up with a 4s 3000mAh battery for heavier throttle usage or longer flight times. 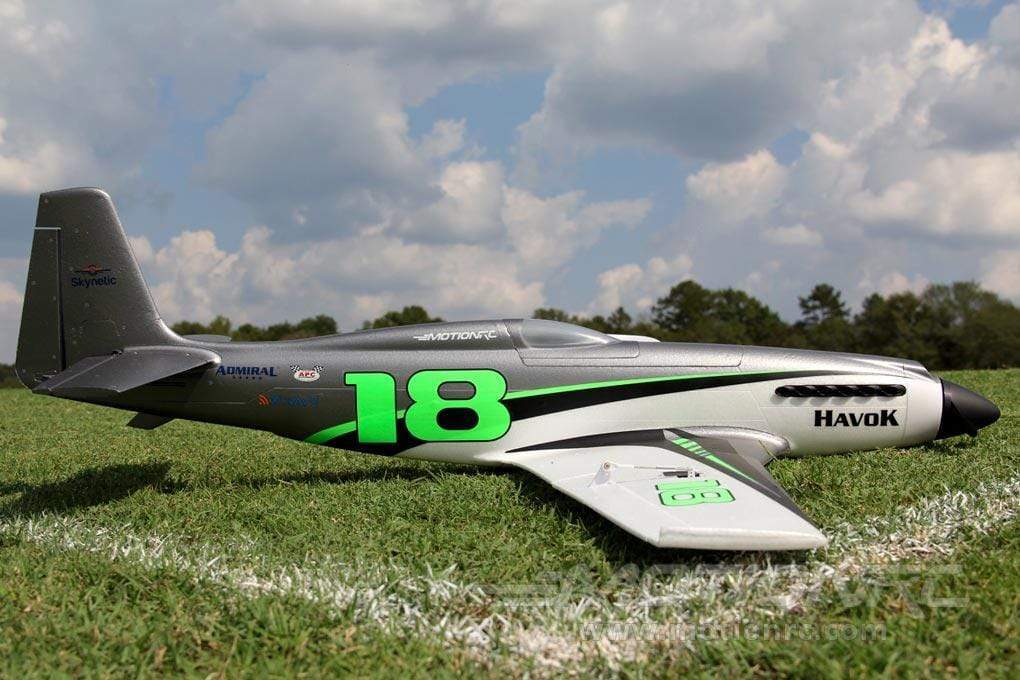 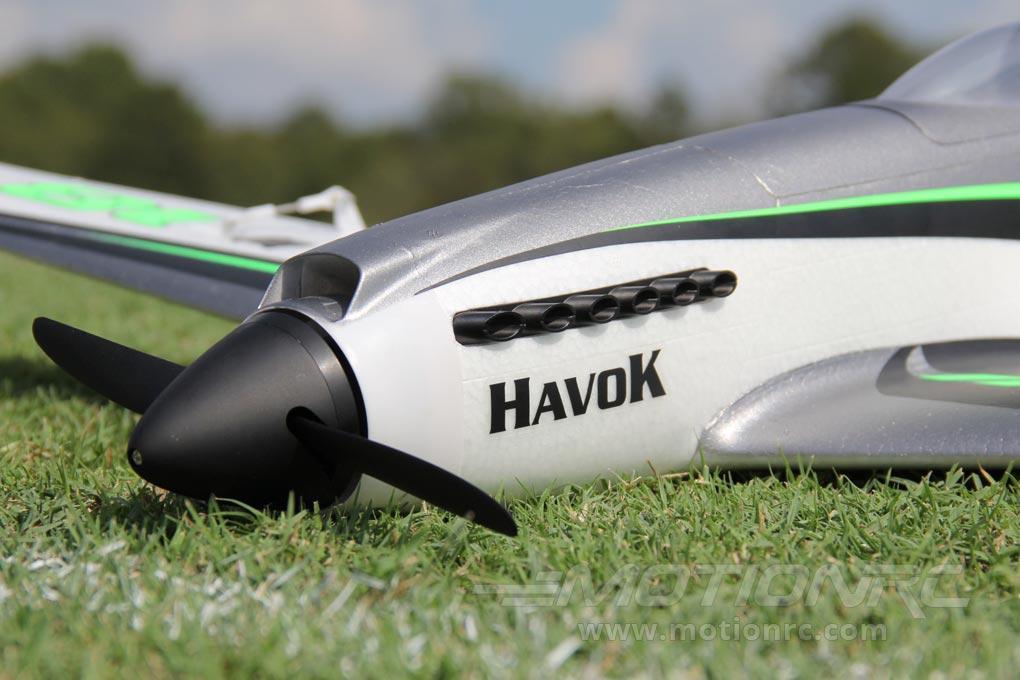 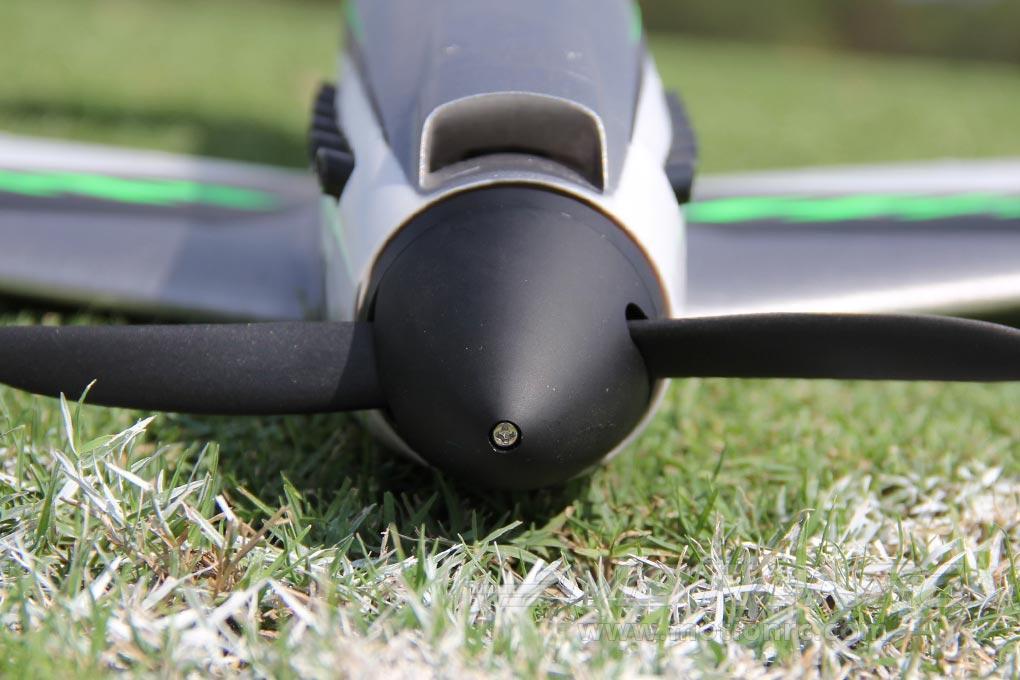 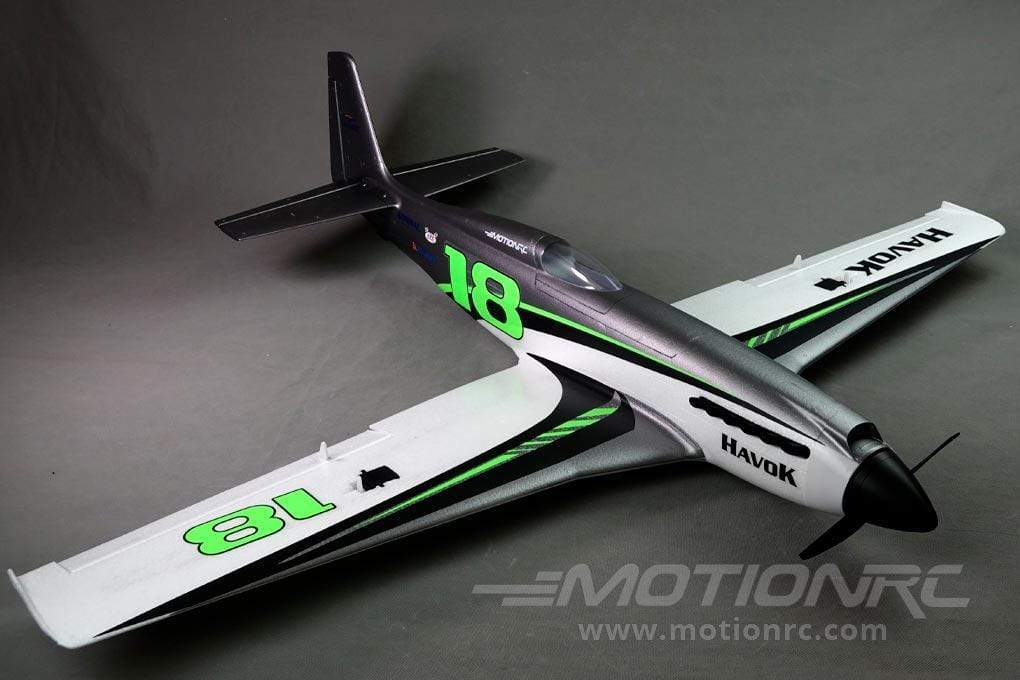 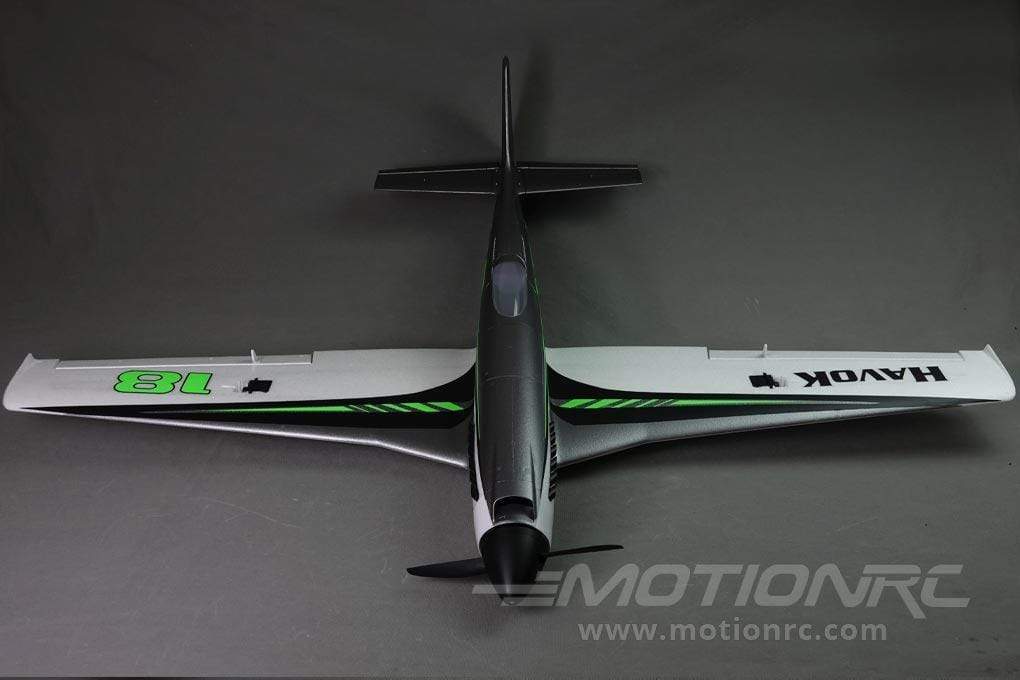 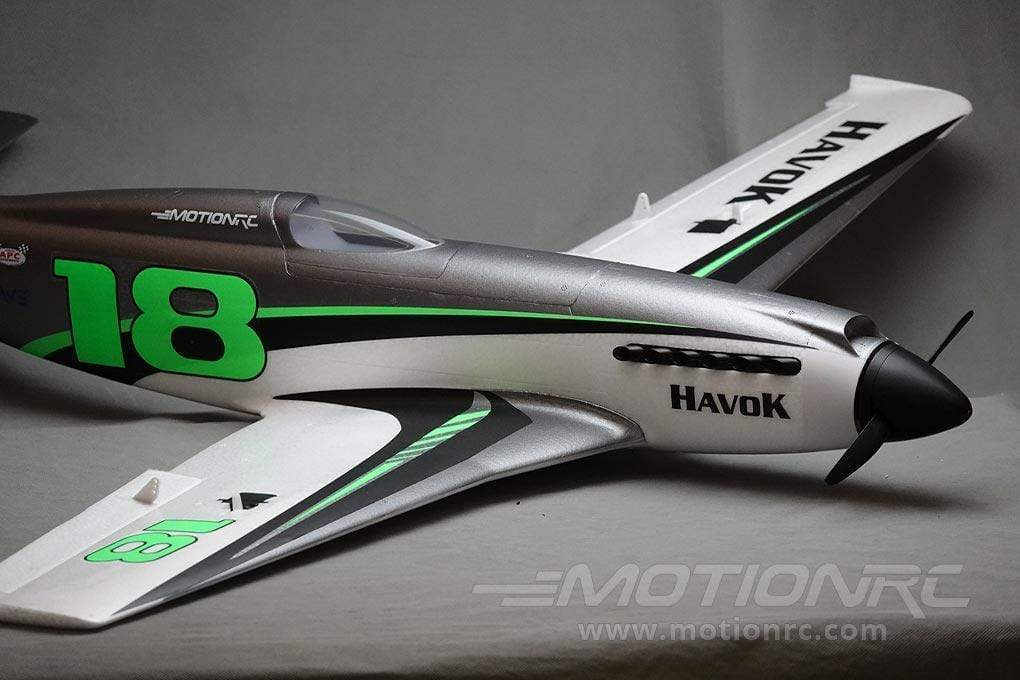 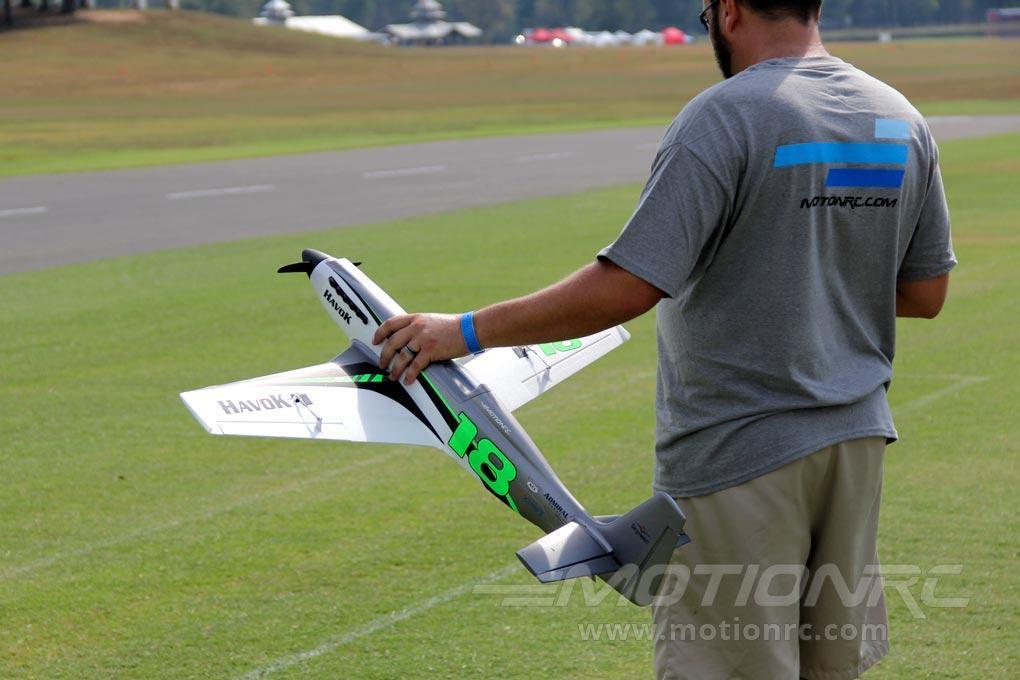 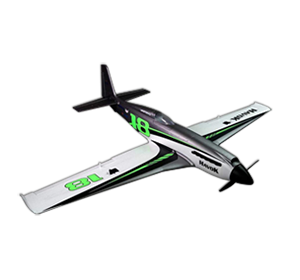 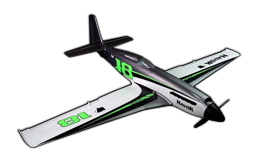 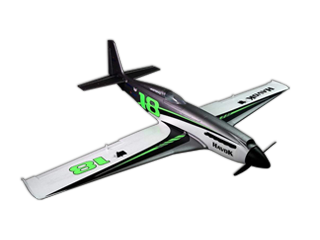 We cannot guarantee that the shops listed below do sell the Havok Racer 1000 in particular but at least we know they do distribute Skynetic. 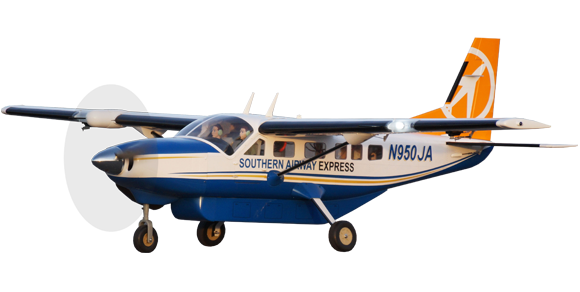 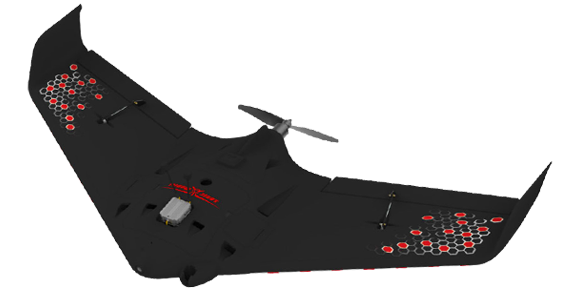 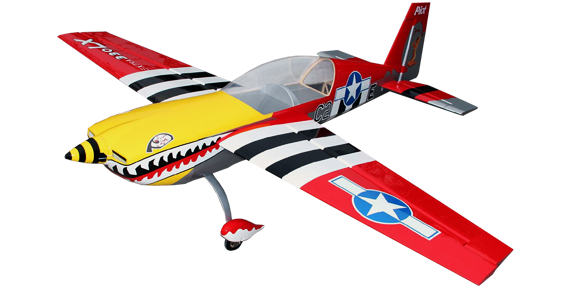